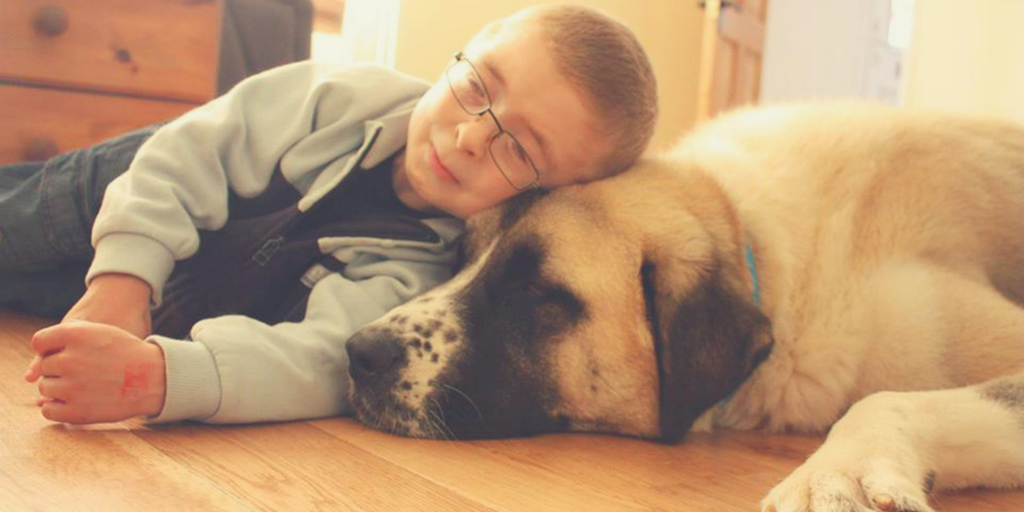 This month we are talking about therapy dogs but right now we would like to talk about dogs as a therapy. Dogs do not need to be trained to have therapeutic benefits in our life and the best example of that is the story of Haatchi and Little B.

Haatchi’s story is proof that dogs can have the will and strength to overcome hard situations and still trust in humans. Haatchi was 5 months when he was bludgeoned in the head and then left on the railway to die. The train came and caused severe injuries to his rear leg and tail. He was able to stagger away and was rescued by the RSPCA thatamputated what was left of his tail and completely removed his leg, in order to save his life. Haatchi is a big dog, an Anatolian Shepherd and it seemed difficult that he would recover from all this trauma, so the final option of putting him to sleep wasn’t completely off the table. However he was lucky enough to be at the RSPCA where the staff members could not bear the thought of this survivor dog not having a chance at life. That’s when an appeal was made for a loving family that could take care of Haatchi and this is how he got to his final destination, the Howkins family (amazingly, just 6 weeks after his surgery!). 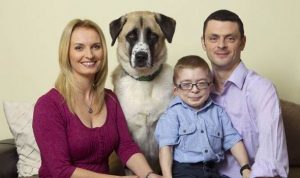 The Howkins are 3 amazing human beings who heard Haatchi’s story and thought they could help him with love, attention, and medical care. They believed they could help him just by giving him a home, never imagining the real implications of it all. As it was, Haatchi’s adoption would already make for a happy ending, but the story does not end here!

Will and Colleen Howkins are the loving parents of a little human named Owen. Owen is a very funny and incredibly smart kid who lives with a condition called Schwartz Jampel Syndrome, a rare genetic disorder which causes his muscles to be permanently tense. Even though it affects his body, the condition does not affect his mind, heart, soul and wonderful sense of humour.

However, even in light of this challenge, the Howkins did not adopt Haatchi as a therapy dog. Haatchi was adopted as a pet who needed a home and a family with lots of spare love to give.

When Haatchi met Owen and Owen met Haatchi they made an immediate connection “like when you meet with a person over and over again, they just sometimes bond with each other, that is hard to explain but that you just feel.” (Owen)

Haatchi came into the room where Owen was resting, 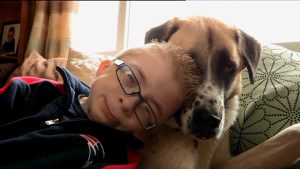 put his head on his lap, and that was it, the connection was made, the bond created and the relationship cemented. They were meant to find each other. “It was ballistic!” is how Owen describes it.

Before Haatchi entered his life, Owen was not a big fan of going outside the house in his wheelchair as he felt people would stare. He was different and did not like that kind of attention. He would go out with his parents but on their backs and trying to keep a low profile so that no one would notice him.

Then came Haatchi, and Owen wanted to be the one responsible for this amazing dog. That does imply the need to take him outside. And so it was. Owen started accepting the challenge and realized that going out with Haatchi would turn the attentions away from his wheelchair and into his Anatolian Shepperd tripod pet. This was a huge improvement in Owen’s quality of life. He became less anxious leaving the house, became more communicative as he loves sharing Haatchi’s life, and started focusing his attention in Haatchi’s needs and somehow letting go of his own pain.

Haatchi also realized Owen was special and never left his side since. He waits at the window for Owen to come home from school and after that he’s always by his side. As Owen went to school, Haatchi also went to training as a therapy dog because Colleen and Will (Owen’s parents) thought he had the perfect temperament for it. He was accepted and does amazing work in hospitals now! It’s easy to picture that, as a big dog, he has the perfect height to lay his head on hospital beds! 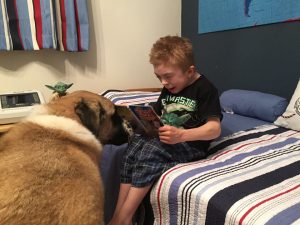 At home, Haatchi is a companion dog and has an outstanding performance! He plays with Owen, helps him with homework (eats them conveniently), and is Owen’s confident (I tried to unveil one of this secrets between a boy and his dog but Owen promptly said :“I believe secrets are not meant to be told, right?”). Haatchi can sense when Owen is more anxious or in pain, gets next to him, cuddles him and helps him relax. This has obviously increased Owen’s quality of life significantly and helped him have more experiences than he would have had were it not for Haatchi.

These two became an inseparable winning team and have already won Dog Contests and their story became very famous! When asked how Haatchi changed his life, Owen refers that “if I didn’t have Haatchi we both wouldn’t go out, we would never have met lots of people, lots of famous people, I’d never gone to formula one world of Monaco and met Lewis Hamilton (his hero)”. There is no limit to the improvements these two broughtto each other’s life!

“Haatchi can make something that other humans can’t, he can walk with three
legs, he can run really fast”! But Owen also firmly says that there is nothing Haatchi can do that Owen’s parents can’t and this just reflects how this is a story of a real family.

Between Haatchi and Owen there is an amazing connection and all it takes is eye-to-eye contact for them to understand each of them is feeling and what the otherneeds. 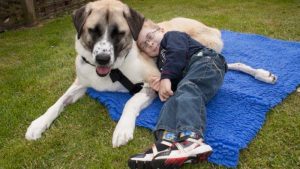 Although this is an amazing story of camaraderie, it doesn’t take a tripod dog or a child with any challenge to show us all that sharing your life with a pet brings a world of benefits and that some dogs and cats (and other species) are really important in their human’s lives.

Owen said he had a mission: to prevent animal cruelty because no dog should ever be hurt like Haatchi was. We think this is an amazing mission and totally support this commitment! Follow this amazing family on Facebook @Haatchi and watch this wonderful video to know a bit  more about them!